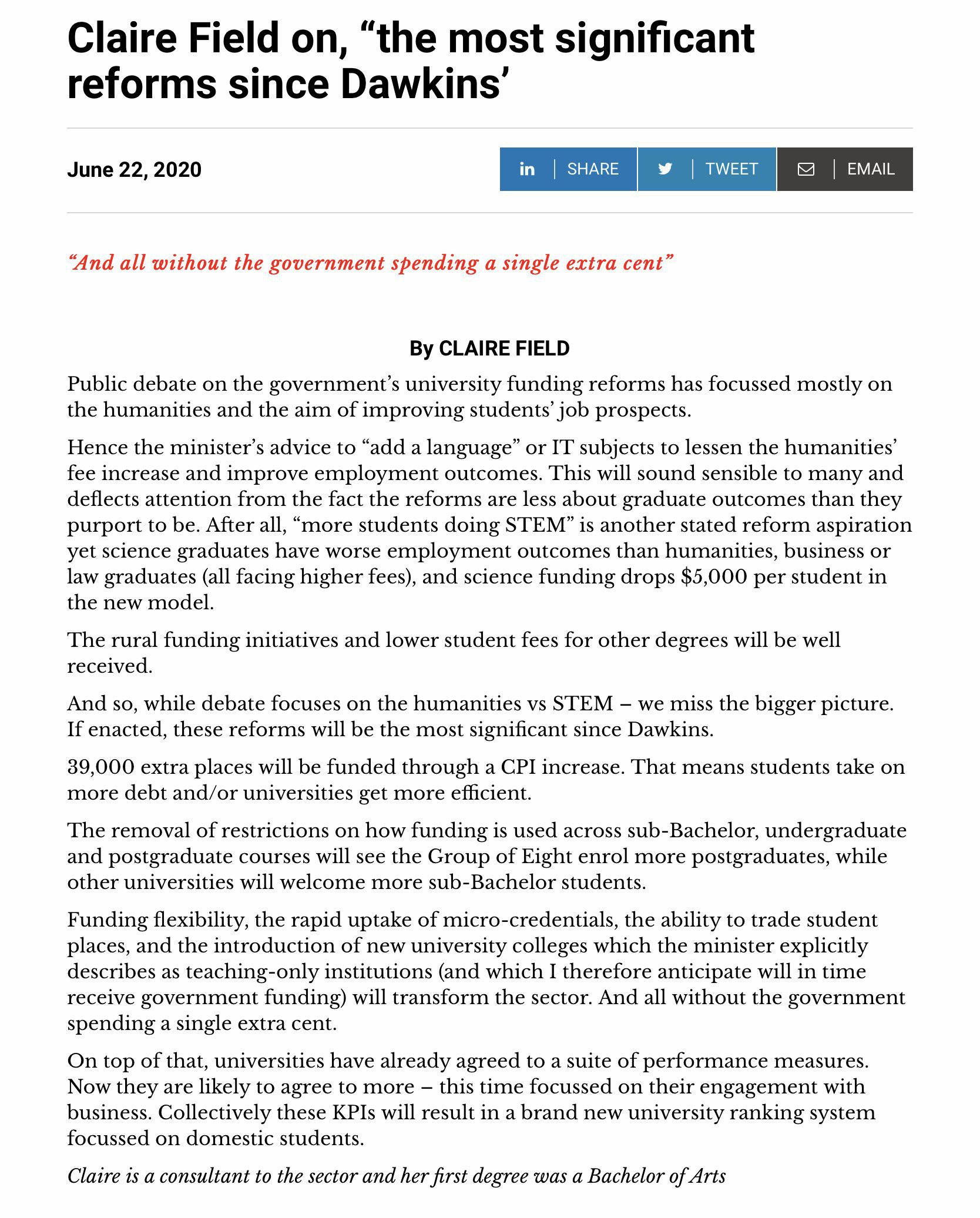 My intention in sharing my views on the university funding reforms in this morning’s edition of Campus Morning Mail was to spark debate about some aspects of the reforms which had generated less debate than the headline focus on the student fee increase for the humanities and the reduced fees for other disciplines (as a means of encouraging students towards courses with better employment outcomes).

The article is shown above (or you can read it here).

It generated some debate on Twitter as to whether Minister Tehan’s proposed reforms warranted my description of them as ‘the most significant since Dawkins’.

With a 300 word limit on my weekly column in CMM it is not possible to go into a great deal of detail – and hence this post.

I did not liken these reforms to those of former Minister Dawkins because I was ignorant of the Gillard and Howard governments’ changes.

Both the Gillard and Howard governments’ reforms focussed on increasing the number of students at university but, in my view, did not try and shift universities away from being the comprehensive research institutions many describe them as today.

Dawkins on the other hand changed both funding arrangements to expand access via HECS and, with the ‘Australian Unified National System’, changed the definition of a university by relabelling the Colleges and Institutes of Advanced Education (as well as introducing full fees for international students).

If Minister Tehan gets these reforms through he will have increased the number of students currently studying at university by increasing the level of the student contribution (to 93% of the cost of their course for a good number of students) and forcing efficiencies on the universities – AND he will have increased the differentiation between universities by allowing them flexibility in how they use their funding.

The proposed funding flexibility will enable universities to trade places – allowing them (if they wish) greater specialisation in the discipline areas they teach. It will also allow them to use their funding at whichever AQF levels they wish. This will also increase the degree of differentiation – with some welcoming a much greater number of diploma and associate degree students and others enrolling fewer undergraduates and more postgraduates.

Obviously this shift will not be an overnight one – but a decade on from these reforms being introduced (if they are) I think there will be significantly more differentiation across the universities than is currently the case.

And that is before the Minister starts his conversation with the sector about a ‘sustainable pipeline of funding for research’ and before he provides further details on the ‘improved prudential requirements’ he intends introducing in the context of international education.

I also think it is telling that the Minister chose to specifically mention university colleges as teaching-only institutions in his National Press Club speech. After all there are 135 higher education institutions which already exist and are predominantly teaching only – and which are separate from universities and university colleges. If university colleges are to receive government funding in the future (and that is a supposition on my part at this stage) – then these government-funded ‘teaching only’ institutions would add further differentiation to the “university” sector. It is worth keeping in mind that when Peter Coaldrake made his recommendations on the higher education provider categories – he suggested these ‘elite’ non-university HEPs should be called ‘national institutes’. It was the Minister who chose to use the “university college” nomenclature.

Finally – I should be clear that I think the lack of extra government funding to support the additional 39,000 places is wrong – particularly at a time of significant youth unemployment and with Australia entering recession.

A response to the Productivity Commission
Scroll to top